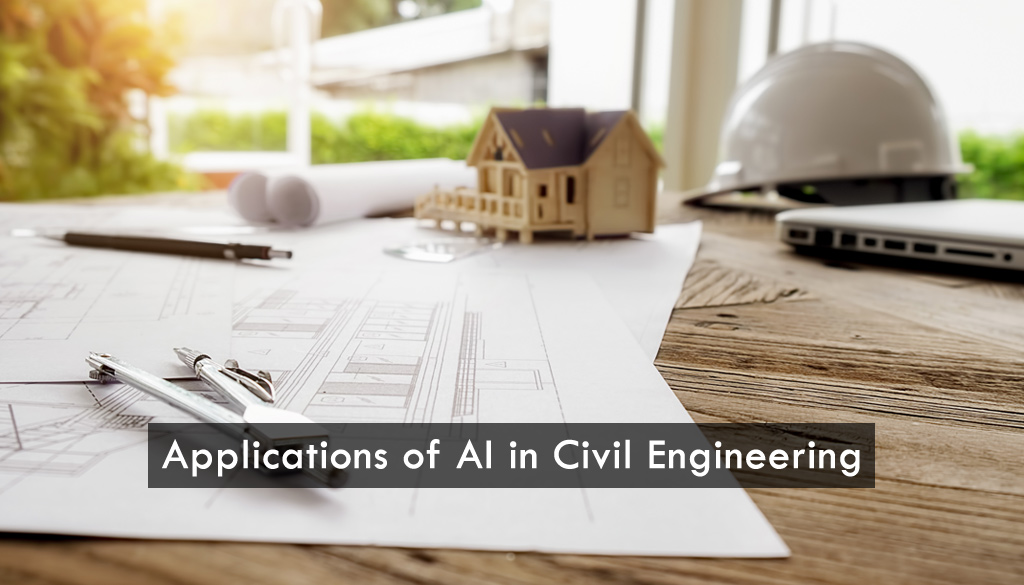 Augmented Intelligence, commonly known as AI or Artificial Intelligence, is a reformatory technique that involves the machines to do the work intelligently, effectively, and efficiently. It is considered to be one of the ways which incorporate the abilities of human beings in such a way that the task can be accomplished, which neither the machines nor the human beings can do individually. By considering the principles of AI, any information is available in a structured way, at a user’s fingertips, thereby helping the users to make the best and right choice in considering the data background with concrete evidence.

Disciplines of AI in Civil Engineering:

The various disciplines of AI that can be used in the field of civil engineering include Machine Learning, Deep Learning, Fuzzy Logics, Pattern Recognition, Decision Trees, Swarm Optimization, and Evolutionary Computations. All these disciplines of AI find applications in various sub-disciplines of civil engineering. But, out of all mentioned, Pattern Recognition, Deep Learning, Fuzzy Logic, and Neural Networks play a vital role in solving complex civil engineering problems. PR or Pattern Recognition is the branch of the AI that classifies the object into various groups, classes, or categories. This classification is based on different application areas and categories such as images, signals, speeches, etc. PR works with Statistical Decision Theory, as the outcome of the latter is used to define a decisive boundary between the different pattern classes. The classification of Machine Learning – Deep Learning, primarily consists of several networks, including both unstructured and unlabelled data. These are already included in the principles of DNN – Deep Neural Networks. The designs of DNN consist of CNN – Convolutional Neural Networks and RNN – Recurrent Neural Networks. The architecture of CNN is used widely in the application areas of the Structural Engineering and Construction Industry. The visual cortex of animals is the inspiration behind the principles of CNN. With the ability of image recognition, the sporadically connected neurons in CNN are capable to determine the 2D topographical features of any area under consideration, having pixels better than a standard neural network.

With the progression in science and technology and taking into consideration the principles of Industry 5.0 and Construction 5.0, Augmented Intelligence (AI) plays an important role in the various sub-disciplines of Civil Engineering. Some of the most important applications include

All Branches in Civil Engineering

Structural Health Monitoring is the process of executing a detection of damage and characterization approach for the engineered building and structures. It involves the process of Statistical Models Development, Data Feature Extraction, Operational Evaluation, and Health Monitoring. The objectives of SHM include assessment of post-earthquake structural integrity, monitoring of structures affected by external factors, the decline in construction and growth in maintenance needs, the move towards performance-based design philosophy, performance enhancement of an existing structure, and feedback loop to improve the future design based on experience. With the help of AI, many sensors and dampers are been designed and installed in the structures to perform the above stative objectives. In SHM, the approach used is known as a model-driven approach, which emphasis on the numerical modeling of a particular structure, based on finite element modeling (FEM), which develop the relationship between the discrepancies measured and the generation of model data for detection of damage in a particular structure.

Neuro-Modex is a Neural Network System for Modular Construction Decision Making that helps in the process of decision making to choose either a conventional model or to go for some modification to the existing model for a particular project. This decision-making system works on some attributes, which depend on basic five disciplines:

The neural network for making this particular model is created by collecting data from various construction and engineering industries, and also from some of the environmental industries.

Construction Management System consists of management of the construction project from the very first step of designing to the last step of handing it over to the client. The initial model – designing plays an important role in the process of fusion of a finally acceptable result. The application of neural network forecasts a better design at the initial stage, which includes various significant fields in the construction industry such as calculation and determination of concrete mix grade, load calculations, determination of the tensile reinforcement and depth of the beam, and calculation of moment capacity. Artificial Intelligence finds its application for the generation of plans in different stages of a project, including the explanation of the actions used in the project management with their pros and cons, and how to determine and use the emerging actions into the project plan.

Thus, the various branches of AI are useful in structural engineering and the construction industry. With the beaming expansion of the industry focusing on the idea and application of smart cities in various engineering disciplines, IoT plays an important role in more research applications. It had been noted that to solve the structural problems, relates to health monitoring or damage assessment, the traditional methods are accompanied by technological advancements in terms of sensors and algorithms for the collection of data, implementation, and analysis. Also, whether related to construction management or structural designing and analysis, emerging applications of AI in civil engineering find a worthy result. The usage of these advancements results in better performance and accuracy.