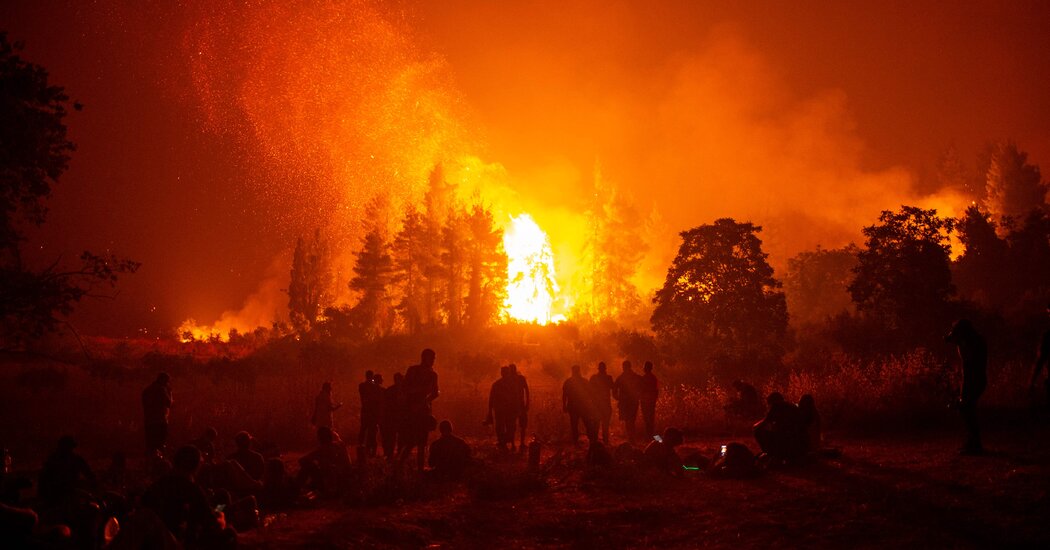 ATHENS — Firefighters battled blazes across Greece on Tuesday after a difficult night on the island of Evia, northeast of the capital Athens, where residents pitched in with water hoses and buckets in a desperate effort to save their homes.

Wildfires were also still burning in nearby Turkey, where at least eight people have died, as well as in Italy and other parts of southern Europe where a record-breaking heat wave has created unusually dry conditions and spurred debate about the damage wreaked by climate change.

Prime Minister Kyriakos Mitsotakis said in a televised address on Monday night that the authorities were doing “everything humanly possible” to extinguish the fires across the country, which he described as a “natural disaster of unprecedented proportions.” The fires have destroyed more than 200,000 acres of forestland in Greece, according to the National Observatory of Athens’ weather service Meteo, with the areas of key concern on Evia and in the southern Peloponnese Peninsula.

On Evia, many residents defied government calls to evacuate their villages, joining forces with firefighters to try to keep raging fires at bay. Some used tree branches to stamp at the flames.

Others formed a human chain with fire hoses between the villages of Avgaria and Kamaria on Monday night and managed to save their homes. A large firefighting contingent remained in the area on Tuesday to avert a possible rekindling.

Fires flared again in several other villages, including Gouves, Galatsades and Kastri as the local authorities sent bulldozers to dig more fire breaks. The authorities on Tuesday issued a new evacuation appeal for the village of Asminio and the church bells rang to alert residents to flee.

Many residents and local officials have actively joined the firefighting effort after complaining that their appeals for support have gone unheeded.

More than 20 nations have been sending support to Greece’s beleaguered fire service.

Firefighters and engines from Poland and Slovakia joined efforts on the ground on Evia on Monday night and French and German reinforcements were to arrive on Tuesday to help fight fires in the country’s Peloponnese Peninsula, according to Spyros Georgiou, a spokesman for Greece’s civil protection secretariat.

Several people have been arrested in connection with the multiple blazes — some on arson charges, others for starting the fires through neglect.

Greece’s Supreme Court prosecutor, Vasilios Pliotas, on Monday asked the police and fire service to investigate possible evidence pointing to the existence of an organized arson plan by a criminal organization, citing the “excessively large number of fires of unusual intensity and expanse” and the fact that many erupted simultaneously.