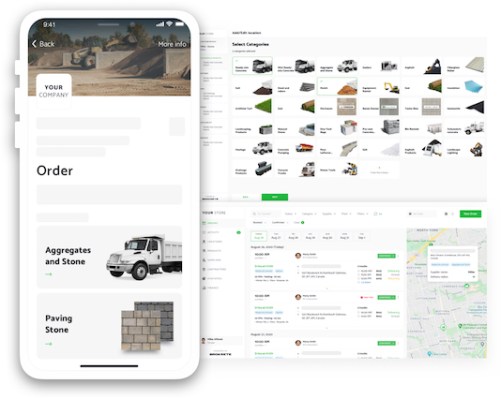 With the pandemic affecting every aspect of life and industry, it’s no surprise that digitization is coming to construction fast. Construction suppliers are increasingly under the same pressure as other sectors to perform at a higher level. We’ve seen the rise of companies like Dozer, Reno Run, and Toolbox try to address this, but often the model is closer to a vertical integration one rather than something more open. Even with that, it’s still the case that to order concrete or bricks, construction companies have to negotiate each time, while simultaneously record keeping.

This is the argument of Brokrete, which bills itself as the “Shopify of construction.”

The startup has now raised a $3M seed financing round led by Xploration Capital, which was joined by unnamed new strategic investors and existing investors. The startup graduated from Y Combinator’s winter cohort last year. Other strategic investors include Ronald Richardson, Avlok Kohli (CEO of AngeLlist Ventures) and the MaRS Investment Accelerator Fund (IAF). The funding will be used to expand in North American and European markets. Brokrete also launched an e-commerce platform for suppliers in the construction industry it calls Storefront.

Jordan Latourelle, the company’s founder and CEO said: “Construction today is a largely offline, $1.2 trillion market where legacy commerce is the norm. Brokrete’s Storefront product equips suppliers with the tools required to enhance their operations by orders of magnitude. I founded Brokrete after seeing an industry left behind by e-commerce giants. Now we are becoming the operating system for e-commerce in the construction industry, while staying easy and affordable at the same time.”

Brokrete says its platform is code-free, white-labeled, multi-channel, and industry-specific to sell and manage orders online. Suppliers get an iOS and Android app for e-commerce to receive offline orders from more ‘traditional’ customers. It then provides order management, payouts, dispatching, logistics, and real-time delivery. There are also financial and operational ERP integrations. Brokrete claims to works with 1000+ contractors and to have a 250+ supplier network.

Latourelle told me: “We’re giving the construction industry an opportunity to use it on a Shopify way, and create their own store. It’s like a branded storefront for suppliers.”

Eugene Timko, Managing Partner at Xploration Capital said: “Construction is one of the few remaining large industries with mostly undigitized supply chains. Historically the key problem was the lack of real-time access to actual stocks which prevented producers and distributors from going online. Now with Brokrete’s end-to-end solution, these businesses can not only sell through Brokrete’s marketplace but can also enable their own direct online channels. Similar to Shopify, this has allowed many thousands of previously offline businesses to start accepting orders online.”