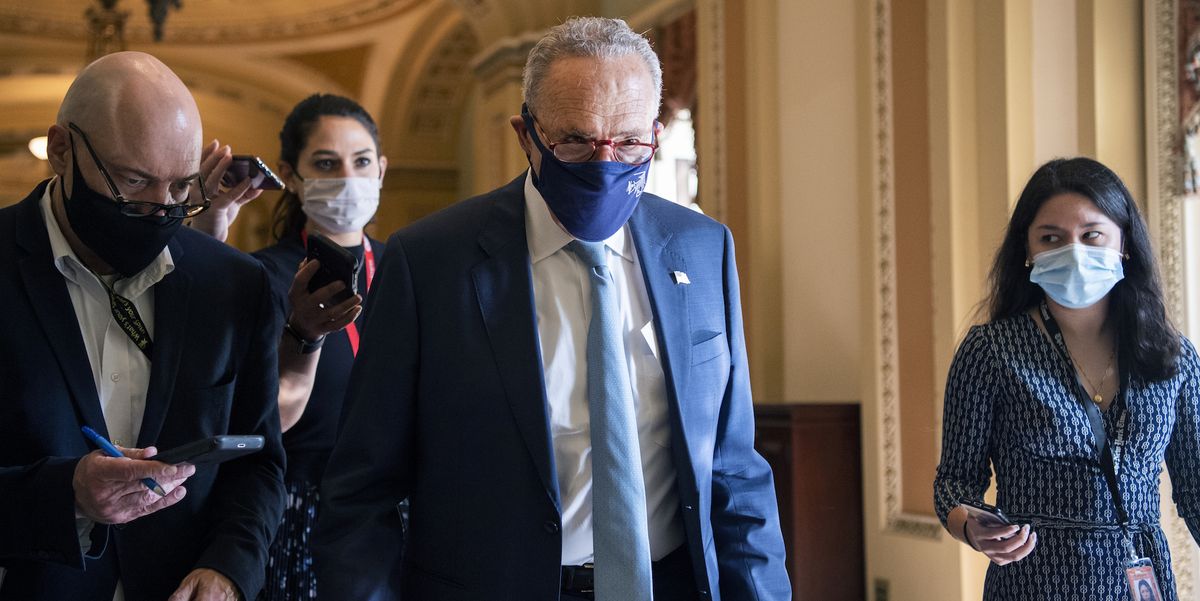 Chuck Schumer stepped out of character on Thursday night and, boy howdy, is the other side of the aisle—and Joe Manchin—terribly upset.

Schumer let fly on the minority’s preposterous brinksmanship as regards the debt limit, and he did so after knuckling 11 votes out of Mitch McConnell and his fellow Republicans so that they can extend things into the first week in December. I have never seen Angry Chuck before. It was quite the sight to see.

Now, Mr. President, in a few moments, the Senate will pass an extension of the debt limit through early December, avoiding a first-ever Republican-manufactured default on the national debt. On Monday morning, I said we needed to pass a bill to address the debt limit by the end of the week, and that is exactly what we did. Republicans played a dangerous and risky partisan game, and I am glad that their brinkmanship did not work.

Yesterday, Senate Republicans finally realized that their obstruction was not going to work. I thank, very much thank my Democratic colleagues for showing our unity in solving this Republican-manufactured crisis. Despite immense opposition from Leader McConnell and members of his conference, our caucus held together, and we have pulled our country back from the cliff’s edge that Republicans tried to push us over.

Oh, this got up everybody’s nose. Democrats are not supposed to wield that kind of rhetorical weaponry. Several Republicans went up to Schumer on the floor. Ooooh, those boys had a mad on. From Business Insider:

Republicans…said they thought the speech was inappropriate. Minority Whip John Thune, one of the 11 Republicans who helped Democrats break the filibuster, said it was “totally out of line… just thought it was incredibly partisan speech after we had just helped them solve a problem,” he said. “I let them have it,” he said.

Stop it. You’re scaring me silly.

But nobody was more verklempt than Joe Manchin, the nominal Democrat from West Virginia, who simply couldn’t shut up about how terribly Schumer had behaved toward the oh-so-cooperative Republicans.

Democratic Sen. Joe Manchin sided with Senate Republicans in strongly disapproving of a fiery, partisan speech by Senate Majority Leader Chuck Schumer on Thursday night before a vote to raise the debt ceiling by $480 billion. Manchin reportedly told Schumer his speech was “fucking stupid,” while Republican Sen. Mitt Romney of Utah said it was a “time to be graceful” after 11 Senate Republicans had voted to break a GOP filibuster and allow the vote to take place.

(Oh, Willard. Schumer was supposed to thank you for not demolishing the national economy for a cheap political win? Your caucus tolerates the graceful rhetoric of Ted Cruz, Josh Hawley, Marsha Blackburn, and the like. Shut your piehole.)

As Schumer spoke, Manchin could be seen behind him placing his face in his hands and shaking his head in disapproval…Manchin, still shaking his head, eventually got up from his seat and walked away.

Neither fast enough nor far enough away.

And, as long as we’re on the subject of hardball, the president has cut his predecessor* loose. From CNN:

White House press secretary Jen Psaki told reporters Friday afternoon that President Joe Biden declined to assert privilege over documents pertaining to former President Donald Trump’s administration sought by the January 6 select committee. During the White House press briefing, Psaki said that “the President has determined that an assertion of executive privilege is not warranted for the first set of documents from the Trump White House that have been provided to us by the National Archives.”

“Fck that noise” is a very useful political argument.

If you need another good laugh to start your weekend, read the Republican minority report that accompanied the Senate Judiciary Committee’s breakdown of how the ratfcking operation at Camp Runamuck operated. I especially liked how ranking member Chuck Grassley summarized it:

The available evidence shows that President Trump did what we’d expect a president to do on an issue of this importance: he listened to his senior advisors and followed their advice and recommendations.

Actually, the head crook asking his henchmen for advice is what I expect a mob boss to do. But the actual report has even funnier moments.

It is well-known that President Trump did not trust some elements at the DOJ and the FBI, which evidently contributed to his concerns that DOJ was not doing enough to investigate allegations of election fraud. Despite his distrust, the President listened to the advice of senior advisors at DOJ and the White House and accepted their recommendations in matters concerning DOJ’s handling of election fraud allegations.

I’m sure we all recall how well the former president* swallowed his “distrust” of the DOJ and the FBI during the aftermath of the election—and to this day, for that matter.

Weekly Visit To The Pathe Archives: Here, from 1967, is a unique adventure in security policy. An oft-robbed saloon hires a lioness as a security guard and, one suspects, as an effective bouncer as well, although the lioness seems too young to be in a saloon at all. Plus, really, Meister Brau? Can any bar sell enough Meister Brau to get robbed? History is so cool.

This is completely insane. From ProPublica:

[Tammy] Garrett knew the police had been sent to arrest some children, although exactly which children, it would turn out, was unclear to everyone, even to these officers. The names police had given the principal included four girls, now sitting in classrooms throughout the school. All four girls were Black. There was a sixth grader, two fourth graders and a third grader. The youngest was 8. On this sunny Friday afternoon in spring, she wore her hair in pigtails.

This was all prompted by a ruckus after a pickup basketball game that had been videotaped and shared on social media. But the cops weren’t there to pick up the boys involved in the ruckus.

But they hadn’t come for the boys who threw punches. They were here for the children who looked on. The police in Murfreesboro, a fast-growing city about 30 miles southeast of Nashville, had secured juvenile petitions for 10 children in all who were accused of failing to stop the fight. Officers were now rounding up kids, even though the department couldn’t identify a single one in the video, which was posted with a filter that made faces fuzzy. What was clear were the voices, including that of one girl trying to break up the fight, saying: “Stop, Tay-Tay. Stop, Tay-Tay. Stop, Tay-Tay.” She was a fourth grader at Hobgood. Her initials were E.J.

The account of the arrest of the girls is nightmarish, but the reason behind the arrest is like something out of the Old West. There’s a juvenile court judge who apparently considers herself somewhere between Judge Roy Bean and the Archangel Michael.

Rutherford County established the position of elected juvenile court judge in 2000, and ever since, Donna Scott Davenport has been the job’s only holder. She sometimes calls herself the “mother of the county.”

(We pause here to note that, at every level, an elected judiciary is an abomination.)

Mother Davenport is a despotic crackpot.

Davenport describes her work as a calling. “I’m here on a mission. It’s not a job. It’s God’s mission,” she told a local newspaper. The children in her courtroom aren’t hers, but she calls them hers. “I’m seeing a lot of aggression in my 9- and 10-year-olds,” she says in one radio segment.

Yes, she has a regular local radio gig.

Davenport enforces a strict dress code in her courtroom, requiring people to “show deference.” There will be no untucked shirts. No sundresses, spaghetti straps or spandex. No body piercings, no uncovered tattoos. Pants shall be pulled up, and if a child shows up without a belt, the judge keeps a bag of them, and if she runs out, “you’ll just have to make do with a piece of rope,” one newspaper profile said. Davenport says children need consequences. “Being detained in our facility is not a picnic at all,” she says on the radio. “It’s not supposed to be. It’s a consequence for an action.”

The report brings Mother Davenport’s resumé into question, but that never kept her off the bench, nor has it slowed her reign of god-soaked terror.

The following year, Rutherford County violated federal law 191 times by keeping kids locked up too long, according to a story later published by The Tennessean. By law, children held for such minor acts as truancy were to appear before a judge within 24 hours and be released no more than a day after that. The newspaper interviewed Davenport, who estimated half those violations occurred because a kid had cursed her or someone else. For cursing, she said, she typically sentenced kids to two to 10 days in jail. “Was I in violation?” she said. “Heck, yes. But am I going to allow a child to cuss anyone out? Heck, no.”

How this awful person is not yet in Congress utterly mystifies me.

According to an article Wednesday in the journal Royal Society Open Science, Pendraig milnerae is a “new small-sized coelophysoid theropod from the Late Triassic of Wales” that roamed the U.K. over 200 million years ago. Theropods are two-legged carnivores with hollow bones and three-toed feet, including T. Rex. The fossilized remains of Pendraig milnerae were dug up in the 1950s from a mine in the Welsh town of Pant-y-ffynnon. Pendraig means “chief dragon” in Old Welsh. At first, scientists mistook the fossils for those of an already-identified dinosaur species then known as Syntarsus, but re-identification of many Syntarsus dinosaurs demanded a new look at the forgotten Welsh fossils, the Natural History Museum in London said in a news release.

Chicken-Sized T-Rex is available at most fine-dining establishments, where its delicious flavor proves they lived then to make us happy now.

I’ll be back on Monday to see how the Republicans in Congress screw up and/or renege on everything that’s happened this week. Be well and play nice, ya bastids. Stay above the snake-line, wear the damn mask, and, for the love of god, get the damn shots.