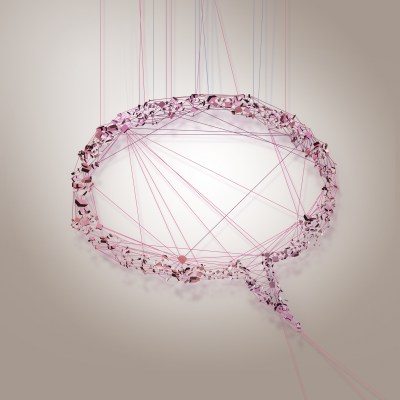 Beth Esponnette is the co-founder and executive chair of unspun, a startup that makes custom-fit jeans from a body scan using machine learning and 3D weaving.

Elizabeth Holmes’ raspy, deep voice helped her raise more than $700 million for her now-defunct company, Theranos. When I step into any boardroom for a pitch, I can hear her croaking her favorite line: “I hope that less people will have to say goodbye too soon to people that they love.”

Sitting across from a venture partner, I wonder if they might feel more compelled by my words if I cut my hair short (really short), or grew a beard, or removed my pregnant belly. Would they take out their checkbook if I were more aggressive in what I promised? Would they be more interested in getting to know my business and me better if I passionately slammed the table?

Holmes adopted a ridiculously low voice to get her startup off the ground in a world full of men. She promised impossible pinprick tests to detect hundreds of diseases and collected influential investors like Henry Kissinger, George Shultz, James Mattis and Betsy DeVos. She wore a Steve Jobs uniform — including the Issey Miyake turtleneck — and built a team of 800 brilliant people. Did she go overboard with her lies? Yes. But she’s not the only one. The Silicon Valley and venture landscape only exacerbated whatever beliefs she already had in her company and inclinations to promise the moon.

Last week at a virtual hearing, she pushed to keep a huge database of information protected from the government. Before that, she claimed to have made $100 million in revenue in 2014, when it was really $100,000. These things, among others, are hands-down inexcusable. But I still believe that she thought she was doing the right thing taking the universal advice of Silicon Valley: “Fake it till you make it.”

She once said, borrowing from previous thought leaders: “This is what happens when you work to change things, and first they think you’re crazy, then they fight you and then all of a sudden you change the world.” I wonder if she just thinks she’s now on part two.

Raising money to start a company is about two things: having connections and making an appearance. Connections are difficult to make when you’re a woman: “Only about 12% of decision-makers at VC firms are women, and most firms still don’t have a single female partner.”

And even if you have connections, building relationships can be a bit weird: My cofounders end up being text buddies with our investors, while I hear news of things in passing. We hit a peak of 2.8% of funding going to women-led startups in 2019, but in 2020, that dropped again to 2.3%, possibly because investors reverted to their standard habits of keeping their cards close during uncertain times. Furthermore, investors generally have expectations that are aligned with male tendencies. For example, identical slides and scripts that are read by men and women are judged very differently, with men overwhelmingly rated higher. Holmes’ deep voice, although off-putting, probably made her more convincing.

It’s not easy to replicate the fundraising success that Holmes had, though. If other women tried to emulate this, they’d likely be penalized: In general, forward men are viewed positively as assertive, while forward women are viewed as emotionally unstable. This is confusing because, inversely, if women retreat to stereotypically feminine behaviors, they are viewed as weak. Hillary Clinton got stuck in this during her presidential race — criticized for being aggressive and cold when stereotypically masculine traits and pegged as weak when showing stereotypically feminine traits.

I am absolutely no “holmie,” but I do understand firsthand her need to role-play. I’ve been overlooked; hell, I’ve even been told to change my product line (bras) because venture capitalists won’t get it. And they didn’t. I gave in.

I don’t want to defend her, and I can’t. It’s so easy to drop a line at a party or a board meeting about how obnoxious she was in her venture, but what irks me is that we focus on her specifically as the problem, completely bypassing the environment that created her. I remember soaking up John Carreyrou’s tantalizing book thinking, “Wow, I’ll never do that,” as I started my company. But as I have seen the pressures and the biases, I can see how the system shaped Holmes.

Why don’t we judge the biased system we created as much as we judge the person it destroyed? She sticks out like a sore thumb because, well, how many Elizabeth Holmeses are there out there? These problems are so ingrained in the system itself, though, that as David Foster Wallace alluded to in the water speech, we can’t see them and we probably aren’t ready to repair them.

The next time someone jokes at a cocktail party about Holmes’ baritone voice, just remind them how dumb is it that we give more money to people with deep voices.