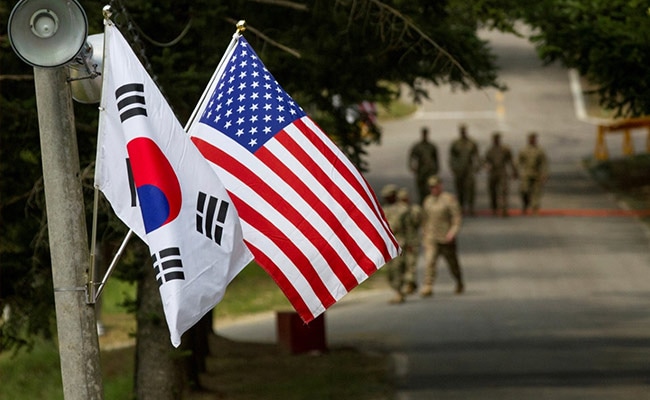 South Korean and American flags fly next to each other at Yongin, South Korea (File)

Seoul: North Korea did not answer routine calls on inter-Korean hotlines on Tuesday, South Korea said, hours after a senior official in Pyongyang warned the South and the United States over annual joint military drills set to begin this week.

Kim Yo Jong, the powerful sister of North Korean leader Kim Jong Un, accused South Korea of “perfidious behaviour” for going ahead with the drills after North Korea agreed to restore hotlines in late July, having cut them last year amid rising tensions.

In a statement carried by North Korean state news agency KCNA, Kim Yo Jong said the exercises were an “act of self-destruction for which a dear price should be paid as they threaten the safety of our people and further imperil the situation on the Korean peninsula”.

“They are the most vivid expression of the U.S. hostile policy towards (North Korea), designed to stifle our state by force,” she said.

The two Koreas typically check in over the hotlines twice a day, and North Korean officials answered morning calls as usual on hotlines maintained by South Korea’s military as well as on those used by the unification ministry, which handles relations with the North.

But when the South made calls in the late afternoon they were unanswered, the unification and defence ministries said.

The nuclear-armed North’s reaction to the drills also threatens to upend efforts by South Korean President Moon Jae-in to reopen a joint liaison office https://www.reuters.com/world/china/exclusive-north-south-korea-talks-over-summit-reopening-liaison-office-sources-2021-07-28/?taid=6100faa3cb40370001903d27&utm_campaign=trueAnthem:+Trending+Content&utm_medium=trueAnthem&utm_source=twitter that Pyongyang blew up last year, and to hold a summit as part of efforts to restore relations.

“Combined training events are a ROK-U.S. bilateral decision, and any decisions will be a mutual agreement,” spokesman Martin Meiners said, using the initials of South Korea’s official name.

A spokesman for South Korea’s defence ministry declined to comment on the preliminary drills during a briefing on Tuesday, and said the two countries were still discussing the timing, scale and method of the regular exercises.

South Korea’s unification ministry said in a statement that it would not speculate on North Korea’s intentions but would prepare for all possibilities.

Yang Moo-jin, a professor at the University of North Korean Studies in Seoul, said Pyongyang might be positioning ahead of future talks with South Korea and the United States.

“Though (Kim) mentioned ‘perfidious behaviour,’ her tone seemed relatively restrained as she didn’t threaten specific actions they might take, unlike in the past,” he said.

The United States has kept around 28,500 troops in South Korea – a legacy of the 1950-1953 Korean War, which ended in an armistice rather than a peace deal, leaving the peninsula in a technical state of war.

The joint military exercises were scaled back in recent years to facilitate talks aimed at persuading Pyongyang to dismantle its nuclear and missile programmes in return for U.S. sanctions relief.

But the negotiations collapsed in 2019, and while both North Korea and the United States say they are open to diplomacy, both also say it is up to the other side to take action.

Kim said U.S. military actions showed that Washington’s talk of diplomacy is a hypocritical cover for aggression on the peninsula, and that peace would only be possible if the United States dismantled its military force in the South.

North Korea would boost its “deterrent of absolute capacity”, including for “powerful preemptive strike”, to counter the ever-increasing U.S. military threat, she said.