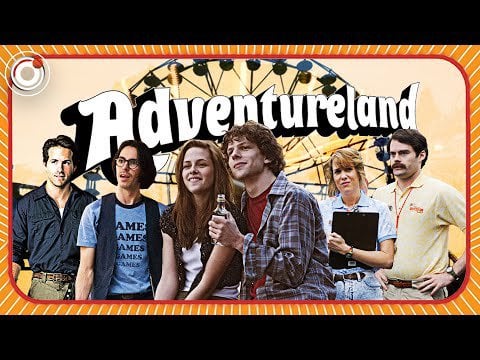 Adventureland is one of the best coming of age movies of i’ve ever seen. Everything about this movie is good, from the perceptive script and sensitive, intelligent directing of Greg Mottola, to the acting by the entire cast. Full of humor and nostalgia, it’s a sweet, insightful coming-of-age comedy that will resonate with teens and adults alike

James (Jesse Eisenberg) and Em (Kristen Stewart) are such believable and nuanced characters. It’s Eisenberg’s raw-boned awkwardness and Kristen’s banked-down sense of hurt that bring them alive. I love the supporting cast too (Ryan Reynolds, Bill Hader, Kristen Wiig, Martin Starr), they are all amazing in this

Especially Em is just perfectly written and acted. Coolest character but at the same time has enough complexity for audience to care about. She is just an amazing and simple character. She’s smart, quirky, seems more grown-up than the other, but while she is a girl interested in a guy, she always shows that there’s something serious bothering her. A rebel, but not your conventional type of rebel coming of age character, much more mysterious and alluring. It is her character that makes this film special in my opinion, seemed like real people

Some of the reviews: https://youtu.be/T7GPVjfS4Nw