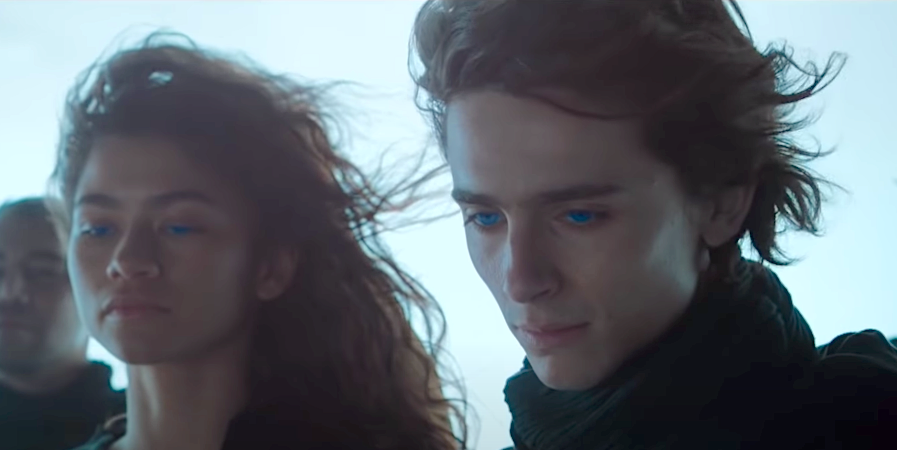 At long last, the end of our wait for Dune is in sight. With sci-fi maestro Denis Villeneuve (Arrival, Blade Runner 2019) behind the latest adaptation of Frank Herbert’s beloved sci-fi epic, Dune is one of the most anticipated movies of the decade, given the property’s long, complicated history.

This Dune will span only the first half of the novel, with the back half slated for a second installment. Villeneuve said of his choice to tell the story in this way, “I would not agree to make this adaptation of the book with one single movie. The world is too complex. It’s a world that takes its power in its details.” Villeneuve had his work cut out for him with Dune, saying, “It’s by far the most difficult thing I’ve done in my life.” He also said, “Dune is by far the best movie I’ve ever made.”

Don’t get too excited, though. Unfortunately, Dune has gone the way of its other high-profile, big-screen peers. Originally scheduled for a December 18, 2020 release, Dune has now been pushed all the way back to October 22, 2021, due to the coronavirus pandemic. At least the delay will finally give you time to churn through all the novels? When you’re done with those, make sure you study up on everything we know about the film adaptation so far, all of which suggests that Villeneuve’s blood, sweat, and tears will pay off.

So, what is Dune actually about?

Published in 1965, Herbert’s Dune is the world’s best-selling science fiction novel of all time. It’s also considered one of the best books of all time, along with a seminal work in the sci-fi genre. The book is set far into the future in an intergalactic feudal society where powerful noble houses fight for control over resources, armies, and planetary power. Paul Atreides is the heir to his powerful house, whose Duke Leto rules the planet of Caladan. House Atreides is ordered to take control of Arrakis, a barren desert planet with a brutal climate, but is the only place to mine Melange—a natural resource that produces a drug called Spice, which allows humanity to unlock their minds to be able to perform highly complex tasks.

On Arrakis, however, Duke Leto is betrayed by the Emperor and their rival House Harkonnen, which sets off a battle over the valuable planet of Arrakis. The planet itself is inhabited with giant sandworms and a native population known as Fremen, who, over generations, have learned to survive with water as their most precious resource and currency. When Paul is targeted as a potential messiah to lead the planet—and galaxy toward a new era—an epic story of war, betrayal, and mysticism unfolds.

Why was it so popular?

Well, upon its release, Dune received a heap of critical praise, winning both the Hugo Award and the Nebula Award for Best Novel. It kicked off an entire series that included five sequels. But the book itself was considered groundbreaking for its unique depiction of the future that tackled complex issues of environmentalism and gender dynamics. It also was hailed as the seminal work of a generation fascinated with psychedelics, as the Spice substance resembles a drug that helps the user reach untapped areas of the mind.

Villeneuve shares this vision of the novel as a deeply prophetic portrait of the world we live in. He said of Dune‘s thematic resonance, “No matter what you believe, Earth is changing, and we will have to adapt. That’s why I think that Dune, this book, was written in the 20th century. It was a distant portrait of the reality of the oil and the capitalism and the exploitation–the overexploitation–of Earth. Today, things are just worse. It’s a coming-of-age story, but also a call for action for the youth.”

If it was such a big deal, has it become a movie?

Well yes, and that’s exactly what’s so controversial. There have been many attempts to adapt Dune into a movie over the decades, most famously by film genius David Lynch in 1984. That version was a massive failure, both critically and commercially, and is considered one of the biggest flops in movie history. Other attempts have been made by Ridley Scott, Peter Berg, and even Frank Herbert’s son, but none ever made it into production.

An underwhelming miniseries version was released on Sci-Fi Channel in 2004, but there remains no movie adaptation that has done the book justice. Because of its scope—and the complex internal dialogues and depictions of psychedelic visions—many critics have considered the book impossible to adapt into a movie.

So, now we might actually get a good Dune movie?

Well, that this is being directed by Denis Villeneuve—whose fantastic Arrival was nominated for Best Picture at the Oscars and Blade Runner 2049 was a visual wonder—is very promising. Villeneuve has proved himself more than capable at adapting time-bending narrative structures into films (like Arrival) and create visual masterpieces (like 2049, which included stunning scenes that would make for a very gripping Dune).

Who is going to be in the new Dune film?

This is also very promising. Timothée Chalamet will play Paul Atreides. Rebecca Ferguson is his mother, Lady Jessica. Oscar Isaac is his father, Duke Leto Atreides. Stellan Skarsgård will be the villain, Baron Vladimir Harkonnen. Villeneuve has promised a new approach to the baron, created with full-body prosthetics in this adaptation, saying, “As much as I deeply love the book, I felt that the baron was flirting very often with caricature. I tried to bring him a bit more dimension. That’s why I brought in Stellan. Stellan has something in the eyes. You feel that there’s someone thinking, thinking, thinking–that has tension and is calculating inside, deep in the eyes. I can testify, it can be quite frightening.”

Dave Bautista is the Baron’s nephew, Glossu Rabban. Zendaya is Chani, an important woman in her Freman tribe. Javier Bardem is in talks to play Stilgar, the leader of the Fremen tribe. And Josh Brolin has joined the cast as Gurney Halleck, a minstrel warrior. Jason Momoa will join the film as Duncan Idaho, a skilled swordmaster for House Atreides. Momoa described the film as, “a very adult movie, but so beautiful.”

How is this Dune updating the source material?

As with any midcentury work of science fiction, Herbert’s vision of gender dynamics can seem dated to the twenty-first century eye. Villeneuve has worked to modernize the women of Dune, expanding Lady Jessica’s role and even genderbending another character.

Ferguson said of the new and improved Lady Jessica, “She’s a mother, she’s a concubine, she’s a soldier. Denis was very respectful of Frank’s work in the book, [but] the quality of the arcs for much of the women have been brought up to a new level. There were some shifts he did, and they are beautifully portrayed now.”

As for Dr. Liet Kynes, the leading ecologist on Arrakis, Villeneuve has depicted the character not as a white man, as Kynes is traditionally interpreted, but as a black woman. Sharon Duncan-Brewster, the actress playing the part, spoke powerfully about the change: “What Denis has stated to me was that there was a lack of female characters in his cast, and he had always been very feminist, pro-women, and wanted to write the role for a woman. This human being manages to basically keep the peace amongst many people. Women are very good at that, so why can’t Kynes be a woman? Why shouldn’t Kynes be a woman?”

What’s going on in the trailer?

A supersized new trailer opens with Zendaya’s Chani running down the dangerous state of life on Arrakis, describing the “cruelty” of the outsiders who ravage the planet to mine its rarefied Spice. Then, we cut to Paul, who confides to Duncan Idaho that he’s been having mysterious dreams of a girl on Arrakis. “Dreams make good stories,” Duncan replies. “Everything important happens when we’re awake.”

When House Atreides is called by the Galactic Emperor to bring peace to Arrakis, Paul and Chani encounter one another for the first time. “I know you,” Paul says. “There’s something awakening in my mind.” With encouragement from a member of the Bene Gesserit, a secretive matriarchal order with superhuman abilities, we see Paul step into his destiny on Arrakis, facing down the brutal Harkonnen dynasty for control of the planet. The shit hits the fan quickly, with flames consuming the landscape, and Paul saying, “This is an extermination. They’re picking my family off one by one.”

But stepping into destiny isn’t an easy road for Paul. “What if I’m not the future of House Atreides?” he confides in his father, who replies, “A great man doesn’t seek to lead. He’s called to it. But if your answer is no, you’ll still be the only thing I ever needed you to be: my son.” We then see the action kick into high gear, with Paul fleeing from a sandworm and launching into hand-to-hand combat. The trailer promises a visually stunning sci-fi epic, bound to satisfy fans and newcomers alike.

When is it supposed to be out?

Dune was originally scheduled to hit theaters on December 18, 2020. In December 2020, Warner Brothers announced that Dune would hit theaters and HBOMax simultaneously on October 1, 2021, along with the studio’s entire film slate for the year. Villeneuve penned a scorching essay about the decision in Variety, writing, “There is absolutely no love for cinema, nor for the audience here. It is all about the survival of a telecom mammoth, one that is currently bearing an astronomical debt of more than $150 billion. Therefore, even though Dune is about cinema and audiences, AT&T is about its own survival on Wall Street. With HBO Max’s launch a failure thus far, AT&T decided to sacrifice Warner Bros.’ entire 2021 slate in a desperate attempt to grab the audience’s attention.”

But even Villeneuve can’t fight Wall Street. More recently, Dune was pushed back three weeks to October 22, as part of a release date shuffle also affecting The Many Saints of Newark and Cry Macho. We’ve waited this long, spice jockeys—we can hold out three more weeks.