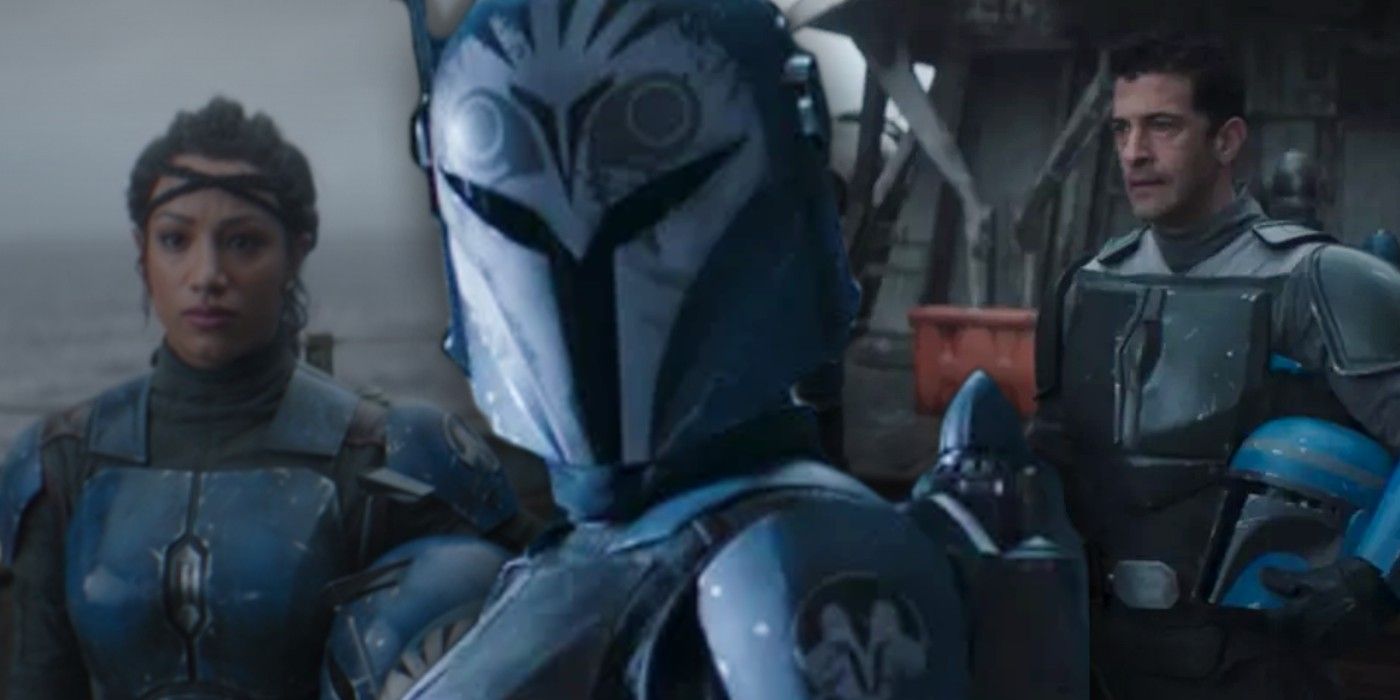 The Mandalorian has reintroduced the Star Wars galaxy to several important factions of the titular race – in particular, the Mandalorian Death Watch and the Nite Owls. The history of both groups is closely tied to the history of Mandalore itself, and to one another. From before the prequel trilogy began to the days of the New Republic, they’ve had a significant role in the direction and galactic presence of the Mandalorian people.

Understanding the Death Watch and the Nite Owls means understanding a bit about the history of Mandalore. In the days of the Old Republic, the Mandalorians were a proud warrior race, with a political and military reach matching that of the Republic itself. Frequently bidding for expansion and galactic dominance, Mandalore fought numerous wars with the Jedi. Centuries of violence and civil wars took their toll, however, and Mandalore itself was reduced to a barren wasteland, forcing the remaining denizens into domed cities.

Eventually, a new government under Duchess Satine Kryze declared an end to Mandalore’s militant past. Any loyalists to the past regimes and the race’s warring traditions were exiled to the moon of Concordia. There they were believed by the so-called “New Mandalorians” to have died out, but of course, that wasn’t the case. Instead, the exiles of Concordia formed a new faction in secret, meant to preserve the old ways of Mandalore – the Death Watch.

From hidden locations on the surface of Concordia, descendants of the old Mandalorian warriors gathered strength under the banner of Death Watch. Pre Vizsla, the governor of Concordia and descendant of ancient Mandalorian Jedi Tarre Vizsla, led the movement in secret while maintaining a superficial appearance of respectability on the moon. Bo-Katan Kryze, sister to Duchess Satine, was also a high-ranking member of the Death Watch during its early days.

Eventually, Satine discovered the roots of Death Watch on Concordia with the help of Obi-Wan Kenobi. The group then went into hiding with Vizsla as their leader. Vizsla’s possession of the Darksaber – Tarre Vizsla’s original weapon which historically signified the ruler of Mandalore – helped gather more aid to their cause. The group began organizing bombings and other terror attacks across Mandalore in an attempt to destabilize Satine’s government and push public distrust in her leadership. The message of Death Watch was simple: Mandalore’s pacifism has made it weak.

In his bid for control of the planet, Pre Vizsla allied himself with the former Sith Lord Maul and his brother, Savage Opress. By gathering underworld strength through an assembled union of crime syndicates called the Shadow Collective, Maul helped Death Watch overthrow Satine’s government and install a puppet regime in her place. However, a struggle for power between Maul and Vizsla resulted in the Mandalorian’s death. Some members of Death Watch fled, defiant to bow to Maul’s rule of their planet, while others remained loyal. Those who stayed fought by his side until the Republic’s siege of Mandalore at the end of the Clone Wars, which saw the remaining members of the group either captured or scattered.

During the rise of Death Watch, another faction of elite Mandalorian commandos called the Nite Owls allied themselves to Vizsla’s cause. The all-female faction was led by Bo-Katan Kryze, who opposed her sister’s vision for a pacifist Mandalore. Through most of the Clone Wars, the Nite Owls served as an elite group within Death Watch. That is, until the arrival of Maul and Savage.

Bo-Katan didn’t trust the Sith, but she went along with the alliance under Vizsla’s suggestion. But after Satine had been successfully ousted and Vizsla was killed by Maul, Bo-Katan ran. The Nite Owls who remained loyal to her followed, and together they began a resistance movement against Maul’s underworld rule of Mandalore. Bo-Katan enlisted the help of Jedi like Obi-Wan Kenobi and Ahsoka Tano to help fight Maul and the Death Watch members who stayed by his side.

Eventually, the Sith was captured and Death Watch removed from power during the Republic’s siege of Mandalore, but not before Satine was killed by Maul. Bo-Katan stepped up as regent of Mandalore in the wake of the war, but clashes with the Empire soon led to her ouster as well. The Nite Owls allied themselves with the Rebellion against the Empire and made numerous attempts to liberate Mandalore from Imperial oppression. After reclaiming the Darksaber and asserting herself as Mandalore (the title for planet’s warrior-leader), Bo-Katan reunited the clans in opposition to the occupation.

The Death Watch & Nite Owls in The Mandalorian

From the time Bo-Katan first took the Darksaber to the era of the New Republic, another series of significant events took place in the history of Mandalore. Most notably, the Great Purge – a genocidal Imperial military campaign to plunder the remaining resources of Mandalore in response to Bo-Katan’s resistance – scattered the remaining Mandalorians throughout the galaxy. The Darksaber was stolen by Moff Gideon, and anyone of Mandalorian descent or connection was forced into hiding.

Related: Other Mandalorians Who Can Appear In Season 2

Those loyal to Bo-Katan and the Nite Owls – the clans who’d pledged their allegiance to her as Mandalore – began working in the shadows to retake their homeworld. They remained in hiding to protect themselves, but only while waiting for the right moments to strike. Their code largely remained as it had always been.

For groups associated with the Death Watch, things were a little different. Coverts founded by former Death Watch members, like Din Djarin’s former covert, adopted a much stricter code of secrecy. Members of these clans were forbidden from removing their helmets in the presence of another, for instance, and the safety of the covert always took priority. This rigid dogma was a natural evolution of Death Watch’s original beliefs, which centered on the idea that Mandalorians had grown weak and endangered because of their divergence from ancient tradition.

Bo-Katan & The Nite Owls In Season 3

The Mandalorian season 2 leaves the door wide open for Bo-Katan to return in season 3 with the rest of her Nite Owls crew. When Din Djarin defeats Moff Gideon and claims the Darksaber, he unwittingly places himself in the middle of the struggle for the throne of Mandalore by effectively claiming the throne for himself. While he clearly doesn’t understand the traditions of Mandalore and attempts to simply give Bo-Katan the Darksaber, she cannot accept it as to rightfully claim the throne from him she must win the Darksaber from Din Djarin in combat. The arrival of Luke Skywalker interrupts this process and leaves the tension between the two built and ready to blow for the next season.

However, Bo-Katan does not seem eager to fight Din Djarin for the Darksaber, despite having worked to reclaim it for so long. This suggests that she might feel that as he won it honorably he could yet be a worthy leader of Mandalore. While the centralized strength of Death Watch and the original purpose of the Nite Owls have changed, the two groups continue to influence Mandalorian culture. Bo-Katan’s continued bid for a reclaimed and free Mandalore will require as much unification as possible.

The Mandalorian season 2 has been working in the direction of this potential unification so it might be that Din Djarin becomes useful to the Nite Owls in season 3 and could become a puppet leader for them himself. Din Djarin was surprised to learn that the Death Watch covert he was part of is seen as a zealous cult and has slowly begun to move away from their teaching, even removing his helmet in front of others on two separate occasions. With begrudging respect from the Nite Owls and Din Djarin moving closer to the Nite Owl’s understanding of what it means to be Mandalorian, there are. a lot of opportunities for season 3 to explore. With Bo-Katan’s previous alliance with Ahsoka Tano, it is also possible that her story could be further explored in the Ahsoka Disney+ TV show. They might not agree on everything, but it remains to be seen if the descendants of Death Watch and the remaining Nite Owls can truly rejoin forces in The Mandalorian.

Next: Mandalorian: How Boba Fett Fits In With New Mandos (Is He One Of Them?)

I Know What You Did Last Summer: Every Clue Lennon Was [SPOILER]

Rick Stevenson is a writer, editor and performer based in Brooklyn, NY. He’s written on TV, film and games for over six years, in addition to assorted stints in bookselling, carpentry, and TV production. Rick studied writing at the College of William & Mary and Oxford University, and can report with some authority that they are both old. He lives and dies for Avatar: The Last Airbender.