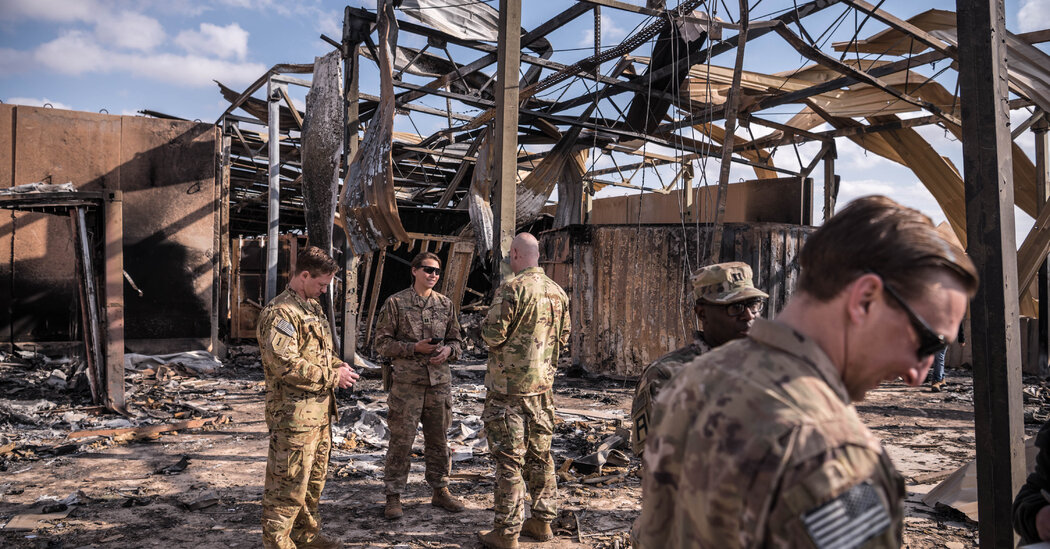 BAGHDAD — Iraq’s prime minister is heading to Washington this weekend to demand that President Biden to withdraw all U.S. combat troops from Iraq, announcing to Iraqi media that the visit would “put an end to the presence of combat forces.”

American officials say the United States is likely to oblige the request from Prime Minister Mustafa al-Kadhimi, setting a deadline to be announced on Monday for the withdrawal of U.S. combat forces.

But Pentagon and other administration officials say they will achieve this not by removing any of the 2,500 American forces currently stationed in Iraq, but by reclassifying their roles on paper. Mr. al-Kadhimi will have a political trophy to take home to satisfy anti-American factions in Iraq and the U.S. military presence will remain.

What appears to be a set piece of diplomatic theater is the latest effort by Mr. al-Kadhimi to tread between the needs and demands of Iraq’s two closest allies, the United States and Iran. Pro-Iranian factions have been clamoring for a U.S. departure, while Iraqi officials acknowledge they still need the help of American forces.

The Biden administration in turn is grappling with how to operate in a country that since the U.S. invasion 18 years ago has fallen increasingly under the grip of Iranian-backed militias and a corrupt political system that has brought Iraq’s government institutions to the brink of collapse.

Mr. al-Kadhimi’s government, along with many senior Iraqi military officials, quietly favor the roughly 2,500 U.S. troops in Iraq staying in their current form. But the killing of Maj. Gen. Qassim Suleimani, Iran’s top security and intelligence commander, along with a senior Iraqi security official and eight others in an American drone strike in 2020, has made the United States’ current presence politically impossible, and politically undesirable in the United StatesAfter the U.S. drone strike, Iraq’s Parliament demanded the government expel U.S. forces — a motion that was nonbinding but sent a strong message to any politician who wanted to stay in power, including the prime minister.

Grappling with the coronavirus pandemic, a budget crisis and powerful Iranian-backed militias largely beyond his control, Mr. al-Kadhimi has accomplished little since taking office two years ago. His advisers argue that if only he were given more time, he could rein in the militias, cut corruption and arrest more killers of hundreds of unarmed protesters and activists.

Most of Iraq’s paramilitary units were formed in 2014 in response to a call by the country’s most revered Shiite cleric for Iraqis to mobilize against the Islamic State. Those militias were later absorbed into Iraq’s official security forces but the most powerful are tied to Iran and only nominally under control of the Iraqi state.

The United States has repeatedly blamed Iranian-backed militias for the persistent attacks on U.S. targets in Iraq. The U.S. and many Iraqi officials believe the militias are also responsible for most of the assassinations of activists and for a wide range of illegal moneymaking schemes.

Monday’s announcement comes as the Pentagon nears the end of its withdrawal of U.S. forces from Afghanistan, ending a 20-year presence there, even as the Taliban have captured dozens of districts around the country in a military offensive.

After President Barack Obama withdrew troops from Iraq in 2011, some remained, under the authority of the U.S. Embassy in Baghdad. Three years later, with Islamic State fighters capturing territory across much of Iraq and Syria, the Iraqi government requested U.S. military support to help fight the terrorist group.

Since ISIS was driven from its last Iraqi stronghold in 2017, U.S. officials have consistently maintained that since there are currently no combat operations authorized in Iraq, there are no combat troops in the country. But they acknowledge a small number of U.S. Special Operations Forces serving as advisers and trainers occasionally accompany Iraqi counterterrorism forces on combat missions against Islamic State fighters.

In Washington on Friday, Pentagon officials said they expected the troop levels in Iraq to remain at their current level of about 2,500, and that the role of some U.S. forces would be redefined.

But while giving Mr. al-Kadhimi temporary political cover, a reclassification of U.S. forces rather than a drawdown likely won’t satisfy the militias and political parties calling for a withdrawal of all troops, Iraqi officials say.

“Changing their name from combat forces to trainers and advisers — we consider it as an attempt at deception,” said Mohammad al-Rubai’e, political spokesman for Asaib Ahl al-Haq, one of the biggest Iranian-backed militias, which maintains 16 seats in the Iraqi parliament.

Those militias and many Iraqi politicians linked to them contend that the real purpose of U.S. forces in Iraq is to counter Iran, not threats from the Islamic State. Iran this year has carried out increasingly sophisticated attacks, including drone strikes, on U.S. targets in Iraq, and the United States has launched calibrated retaliatory strikes.

“The dialogue with the United States is how can we think about maintaining a presence that is useful without incurring a high political cost,” Thanassis Cambanis, a senior fellow at the Century Foundation, an American think tank, said during a visit to Iraq this week. “The interests of the two sides don’t really align because the United States isn’t going to see it in its interests to continue to be attacked by these militias that the government of Iraq can’t curtail.”

Iran denies responsibility for the attacks, according to Iraqi officials, but its leaders have also made clear that they intend to retaliate against the United States for killing General Suleimani and Abu Mahdi al-Muhandis, the Iraqi deputy commander overseeing militias.

The United States over the past year has increasingly focused on force protection, withdrawing from vulnerable bases in Iraq to consolidate its presence on three Iraqi military installations.

While the Islamic State is no longer able to capture territory, the group continues to launch destabilizing attacks such as bombings in markets that point out weaknesses in Iraqi security forces.

“Within Iraq, ISIS is defeated as a significant military threat but its radical ideology lives on,” said Mark Kimmitt, a retired U.S. Army brigadier general and former State Department official who now consults for American firms doing business in Iraq. “Deradicalization, however, is not part of the U.S. mission.”

The American occupation of Iraq convulsed the country, not only toppling its dictator in 2003, but disbanding the army, hollowing out its government institutions and helping returned Iraqi exiles create a political system along sectarian and ethnic lines that haunts the nation to this day.

For years that system has awarded government ministries to political parties that siphon off money meant for public services has contributed to barely functioning hospitals, ongoing electricity cuts, millions of jobless Iraqis and a government that cannot pay its bills.

Infrastructure such as electricity that barely functioned after more than a decade of U.S.-led sanctions before the war has never been fully repaired. Battles against Al Qaeda, Iraq’s civil war and the fight against the Islamic State further damaged infrastructure.

With falling oil prices last year, Iraq found itself having trouble meeting its huge government payroll, which has tripled since 2004 as political parties in charge of ministries create jobs for loyalists.

“We are now talking about repairing damage from the ex-regime, Al Qaeda, ISIS and the damage induced by the ruling political class,” said Luay al-Khatteeb, a technocrat former electricity minister. “If this chaos continues it will lead to the destruction of the country.”