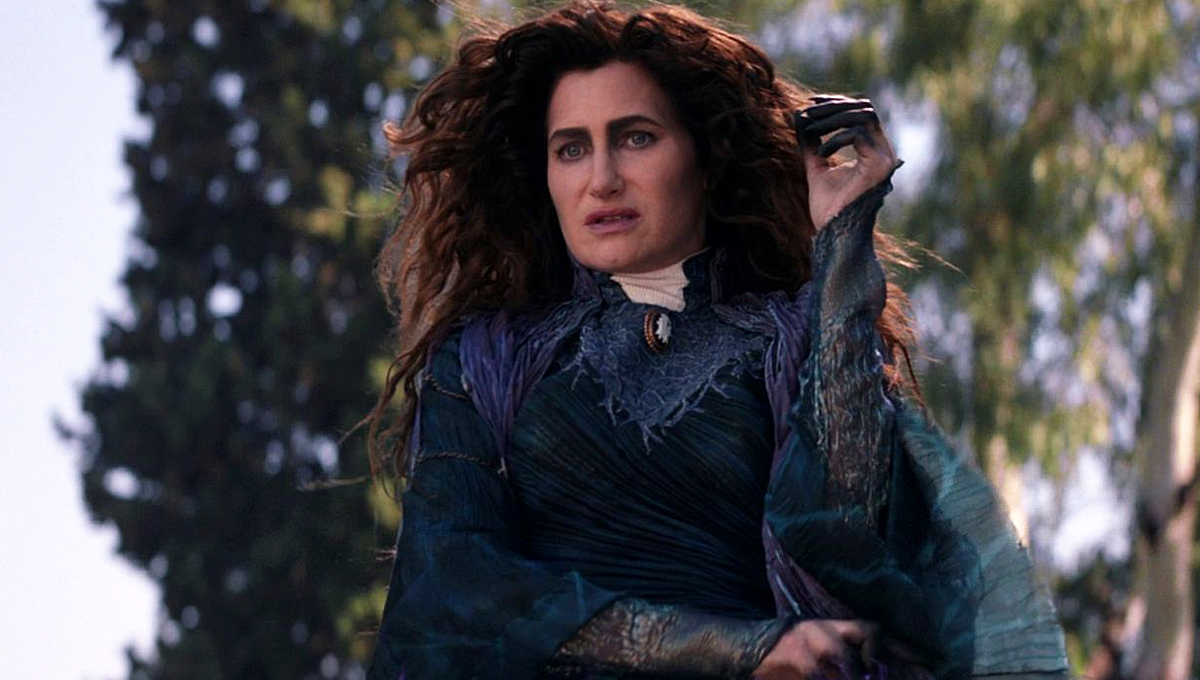 While retrospectives on the year 2021 will likely reflect an array of unpleasantness, the brighter pop culture sections should be lifted by a certain jingle’s three fateful words: Agatha All Along. Indeed, the year saw Disney+ finally bring the Marvel Cinematic Universe to television (officially, anyway,) starting in January with WandaVision, which wrought weirdness, forced fans to theorize and notably gave the world a breakout character in Kathryn Hahn’s live-action version of rapacious witch Agatha Harkness. Thusly, Disney’s reported spinoff plans seem obvious, but still invites speculation about its apparent comedic leanings.

WandaVision fans should be pleased to learn that the show’s band is getting back together for the yet-to-be-titled Disney+ Agatha Harkness spinoff, which, according to Variety, will see Kathryn Hahn headline in a reprisal of her role, once again under the creative auspices of writer/executive producer Jac Schaeffer. Interestingly, the spinoff, reportedly in development, will take shape on the streamer as a “dark comedy.” It’s a notion that begs many questions, seeing as Agatha—despite the mischievous nature that made her an immediate favorite—was the clear villain of WandaVision, and perpetrated generations’ worth of cruel crimes. However, an answer might reside in that show’s unique rotating carousel of sitcom influences.

As viewers of WandaVision came to learn, Hahn’s Agatha Harkness, who we initially met as busybody nosy neighbor “Agnes,” is actually an ancient witch, one who dates back to at least the late-1600s during the era of the Salem Witch Trials. Consequently, Agatha’s covetous nature endangered her own coven when she attempted to tap a forbidden magic. However, the coven’s attempted execution of Agatha—led by her own mother—went sideways when she used said forbidden magic to drain their powers and kill them all. The backstory, as revealed late into WandaVision’s run, is tragic, and not exactly compatible with the spinoff’s reported classification as a dark comedy, darkness notwithstanding. Later, Agatha’s sinister scheme in the present day against wayward Avenger Wanda Maximoff (Elizabeth Olsen) resulted in a poetic reprisal that banished her into the show’s pesudo-sitcom world to continue her initially-deceptive existence as the trope-adhering “Agnes.” This is where the character was left, and, potentially, where the source of the show’s comedy can be conjured.

Contextually, while WandaVision’s sitcom motif was known since its earliest preview material, the show’s Jan. 15 premiere episode thrusts viewers into a retro, laugh-track-mired milieu coldly, with no real explanation—notably about the bizarre setting and why the Thanos-slayed Vision (Paul Bettany) is alive again—across the following few episodes. As the episodes slowly dropped on a weekly basis, the ongoing ambiguity resulted in the early perception that the series was shaping up to be a character-driven vanity project that wouldn’t prove consequential to the broader MCU. Surprisingly, intrigue eventually erupted as Wanda Maximoff’s (Elizabeth Olsen) magical fantasy world rapidly evolved from an early-1960s black-and-white setting evocative of The Dick Van Dyke Show to color with a late-60s Bewitched style, an early-70s set evocative of The Brady Bunch, a 1980s Family Ties theme, and even hit the 90s with clear references to shows like Full House (in a bit of satire that’s close to home for Olsen), culminating in a frantic 2000s-era Malcolm in the Middle motif.