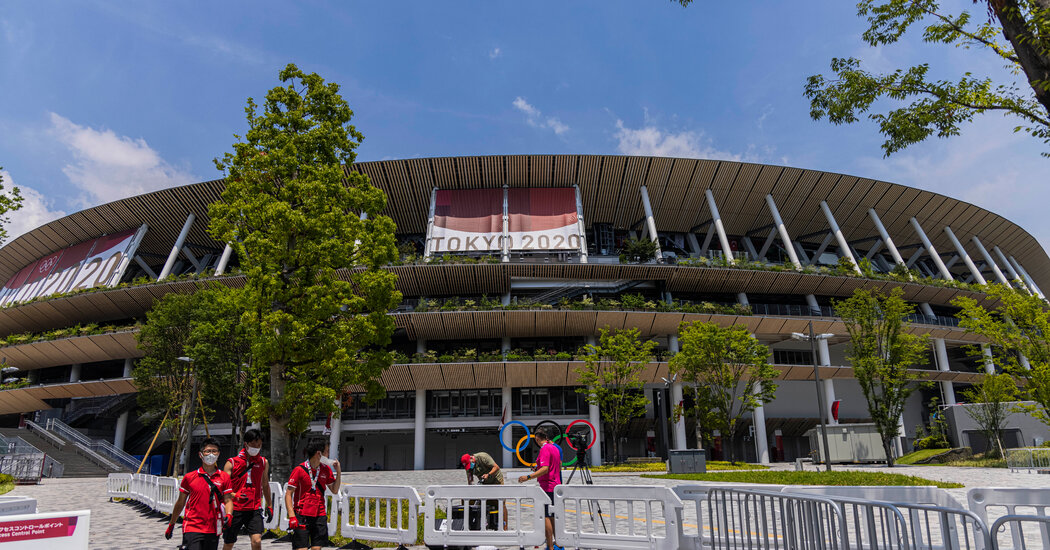 The Olympics open amid fear and controversy

In 1964, the last time Japan hosted the Games, the country was riding high on postwar optimism and economic development. This year, the Games are essentially closed to the public, and many Tokyo residents are fleeing a scorching-hot city that has spent weeks under a state of emergency.

At least 91 people with Olympic credentials have tested positive, including 10 athletes, a rash of cases that raises thorny questions about testing. Only 950 spectators will be at the opening ceremony, which will happen in a stadium that was built for the Olympics and able to hold 68,000.

Tensions go beyond the pandemic and heat. The day before Friday’s opening ceremony, organizers fired its creative director over a 1990s comedic act in which he made fun of the Holocaust. The previous creative director resigned in March over comments about a plus-size woman. Follow along with our live updates here.

W.H.O. calls for another inquiry into the pandemic’s origins

Chinese officials said they were shocked and offended by the proposition to further investigate whether the coronavirus emerged from a lab in Wuhan.

“This plan revealed a lack of respect for common sense and an arrogant attitude toward science,” said Zeng Yixin, the vice minister of the Chinese National Health Commission. “We can’t possibly accept such a plan for investigating the origins.”

The dispute exposes a widening rift over the inquiry into the origins of the pandemic, as the “lab leak” idea gains credibility. Some scientists have said earlier dismissals were premature, and the U.S. has joined other governments in pressing China for more information.

Context: In March, a report released after a joint investigation by the W.H.O. and China said it was “extremely unlikely” that the coronavirus escaped from a lab.

Escalation: In recent days, Chinese government spokespeople have reiterated claims — widely dismissed by scientists — that the coronavirus may have escaped from a U.S. military laboratory.

Here are the latest updates and maps of the pandemic.

On Thursday, waters inundated new areas in Henan Province, and still more rain is in the forecast. The catastrophic floods have killed at least 33 people and displaced 250,000 more so far. At least eight people remained missing, provincial officials said, but those figures appeared to be preliminary at best.

On Thursday, people searched frantically for missing friends and relatives like Yan Yichen, a 12-year-old boy who had gone out to look at the floodwaters. “He never came back,” his grandmother, Cui Yuncai, said, sobbing, when reached by telephone on Thursday.

In Zhengzhou, subway service remained suspended after flooding that trapped trains in tunnels that filled with water, killing at least 12 people.

European floods: German politicians hoping to replace Angela Merkel flocked to flooded towns. But so far, none have come across as strong leaders.

Uriya Rosenman, an Israeli Jew who served as an officer in an elite army unit, opens the viral video.

“Stop the whining,” he taunts, his body tensed. “You live in clans, fire rifles at weddings. Abuse your animals, steal cars, beat your own women.”

Sameh Zakout, a Palestinian citizen of Israel, spits his reply: “I am a Palestinian and that’s it, so shut up. I don’t support terror, I’m against violence, but 70 years of occupation — of course there’ll be resistance.”

So begins “Let’s Talk Straight,” their collaboration, which has garnered more than four million views on social media since May. By shouting each side’s prejudices at each other, Rosenman and Zakout hold a mirror to their shared society and reveal its hypocrisies.

The conversations haven’t been easy. In early video chats, the men debated 1948, a triumph for Israelis and a tragedy for Palestinians. They spoke about their families, and their family trauma: both displaced, both proud. But it’s necessary, they said, to move past stereotypes and discover their shared humanity.

Zakout gets the last word in the video. “We both have no other country,” he says, “and this is where the change begins.”

The latest episode of “The Daily” is on the multinational investigation into the assassination of Haiti’s president.

You can reach Amelia and the team at briefing@nytimes.com.